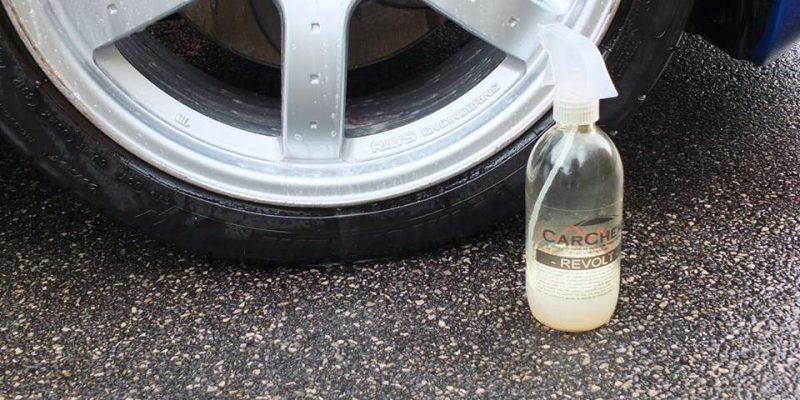 In order to determine the best performing fallout remover product on the market, the following test was conducted.

The concept is simple;

1. One product is applied to, and allowed to work on a surface – for this test I will be using them all on wheels,

2. The surface is then rinsed,

3. Then a second product is applied to and allowed to work on the same surface.

4. Meanwhile the opposite is conducted on a separate surface to provide a control.

The product that, when applied to surface second, picks up the greater amount of fallout is announced the winner and proceeds to the next “round” whilst the losing product is eliminated from the test. The theory is that if a product works well, the next one shouldn’t have anything to react to, ergo the stronger the reaction of the secondary product, the weaker the primary was.

The test continues until only one product remains.

Whilst not an exhaustive list of available products, I intend to use as many as I feasibly can. Some products were added at a later stage, the timing of their appearance in the test should not be taken as indicative of their performance. The products used throughout the test were;


In all cases, except where specified, the surface in question was washed prior to the fallout removers being applied. Products were selected in no particular order.

Whilst designing the format of this test, Nanolex Wheel Cleaner was tested against an old version of another product in this test. As this old product is no longer available on the market, it has not been named here, but this test essentially determined the format for the following rounds. Think of this as a qualifier round.

Both products were applied to separate wheels and allowed to work for 7-8 minutes. Iron Out starts to react faster than Deironizer. taking around a minute to react compared to the 21/2 minutes of Deironizer. Both wheels were rinsed clean. Deironizer was then applied to the wheel that had previously been treated with Iron Out and after 8 minutes there was little sign of any reaction away from the iron wheel weights. Iron Out was then applied to the wheel previously treated with Deironizer and after 8 minutes there were a number of spots reacting across the surface.

Both products were applied to separate wheels and allowed 5-6 minutes to work. AM Iron reacted more quickly than Koch Chemie (<1 minute compared to 3 minutes). Both wheels were rinsed clean. Koch Chemie was then applied to the wheel previously treated with AM Iron and after a further 5 minutes had not reacted to anything on the surface at all. AM Iron was applied to the wheel previously treated with Koch Chemie and after 5 minutes had picked up a significant amount of iron across the surface.

AM Details AM Iron progresses.

Due to low stock of AM Iron the loser from the round one, Wolfs Deironizer, was then immediately applied to both wheels from Round 2 (after the round two products were rinsed off) and after 5 minutes Deironizer was showing significant reactions on both wheels.

Therefore Koch Chemie and AM Iron were eliminated.

Revolt is a typical fallout remover smell whilst Iron has a sweeter hint to it – make no mistake though, it’s by no means pleasant still, the difference is akin to a rotting corpse versus a rotting corpse with a Battenberg cake in it’s pocket (specifically a Batternberg cake, because that’s the undertone scent of Iron, by the way).

W6 is a typical rotting corpse scented fallout remover whilst Ferrous Dueller is a much more pleasant, sweet scent – it’s not going to double up as a air freshener but it’s more pleasant to get a whiff of than others in this test. You know the routine by now, both given 5 minutes to work, rinsed, swapped, given another 5 minutes to work. On the second application Ferrous Dueller immediately picked up several spots. As did W6. After 5 minutes Ferrous Dueller picked up the greater amount, both in terms of number of spots and area covered by said spots.

CarPro currently offer no fewer than 4 (FOUR!!) fallout removers in their range; Iron X, Iron X Paste, Iron X LS and Iron X Snow Soap. I don’t care about Paste. At all. So I didn’t buy any of that. Iron X Snow Soap has interested me slightly, more on that later. CarPro claim Iron X LS (Lemon Scent) has “no more harsh odour with equal power of decontamination as you have come to expect from Iron X Classic”. Classic retains the typical horrendous smell whilst LS is indeed lemon scented with undertones of peroxide. The usual routine was followed with 5 minute work times.

Upon second application LS picked up various areas, whilst Classic… also picked up various areas. “Equal power of decontamination” indeed! More rinsing occurred followed by a second swap and a third application – LS was applied to the wheel which started with LS then had Classic applied whilst Classic returned to its original wheel as well. LS reacted instantly but as the 5 minutes went on it dropped off without picking up any specific spots. Classic on the other hand reacted almost immediately but didn’t drop off and was picking up two or three specific spots. Application numbers 4 (LS) & 5 (Classic) then followed on one of the wheel and each time there was significant reaction.

On the other wheel, previously treated with Classic, then LS, then Classic again, I used Nanolex Wheel Cleaner and Iron Remover. The reaction was significant after 5 minutes.

Upon application I attempted to note any “bleeding effect” from Snow Soap, but because the solution is the same colour as the bleeding effect anyway it was very difficult to tell, therefore I assumed no coloured indicator of it working. IT also stinks like typical fallout removers, which makes it incredibly unpleasant to use as a shampoo. It’s reasonably well lubricated, not the best but far from the worst. Snow Soap was applied, agitated and washed off, then decontamination ability was checked with a dedicated fallout remover, Iron X.

Iron X was allowed 5 minutes to work and it picked up a significant number of specific spots and areas across the surface. Enough for me to conclude that Snow Soap does little-to-nothing in decontamination stakes.

Korrosol has a very sweet scent. I wouldn’t go as far as to say it’s a nice smell, but compared to Iron X it absolutely delightful! I Also like the standard Bilt Hamber spray head too as the spray pattern is in the Goldilocks zone; just right to achieve maximum spread without atomizing the product so much that it’s blown away by the merest of breezes.

Upon second application, Iron X picked up 2 or 3 spots in corners of the spokes. Korrosol picked significantly more across the whole surface.

Upon second application, Korrosol reacted almost immediately (within seconds) to various spots and after 5 minutes had picked up a fair amount, both general areas and specific spots across the surface. Ferrous Dueller picked up absolutely nothing even after 5 minutes.

Upon second application Iron Out picked up several areas and dozens of specific spots. Purple Rain 2.0 picked up nothing at all.

Due to a close run competition between Purple Haze and Korrosol I decided to give Purple Haze a second run out (and prolong the test). Standard format, 9-10 minute work time.

Upon second application, Purple Haze picked up 3 or 4 specific spots in a couple of small area of the surface, Revolt picked up a fair amount more across the whole surface.

It should be noted that during this application Revolt was a sample size bottle with a mini spray head. To eliminate that as a variable I repeated the test on different wheels having decanted the remaining Revolt into the previous full size bottle with standard spray head. During this retest, upon second application Purple Haze picked up one or two small spots, Revolt picked up several small areas and a number of specific spots across the surface.

So our Winner Is… – CarChem Revolt Fallout Remover